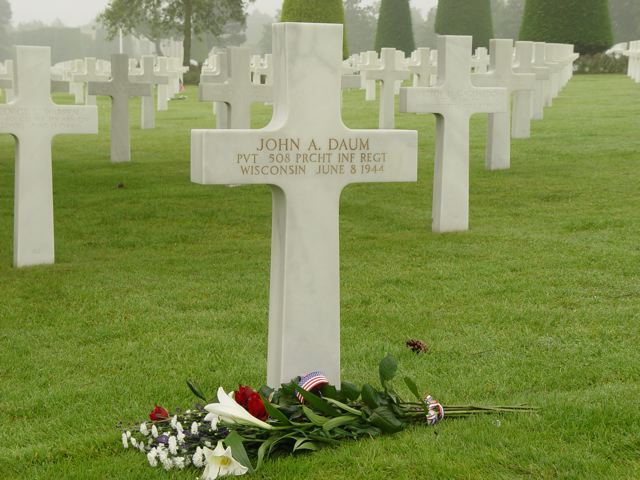 For as long as I can remember my mother always had two pictures of my Uncle “Bud” hanging on the wall.  The first was a group picture of Co. D 71st battalion at Camp Robinson, Arkansas.  The other was an 8x10 of him in his Paratrooper uniform.

As a child I would occasionally ask questions about him.  She would usually just answer that he died in the war.  That he stayed back to guard the camp and was killed by a sniper.  The Army even reported that he was KIA 6/23/44 when the actual date is listed as 6/8/44.  After I moved from home I would think of Bud but never really followed through with any more questions.  When I was very young I told her that I would go to Europe and find out about him.  At the time I don’t know if she (or for that matter, even myself) believed that I would follow through with my actions.

In 1994, the 50th anniversary, my interest peaked again about my Uncle Bud.  I remember seeing the stories about the invasion on the Today Show with the veterans at Normandy.  It was at that time I realized what battle my uncle was in and that he may have been killed on D-Day.  I remember a fishing trip at the time with my brother Chuck, who served in Vietnam, we talked about the jump and what Bud may have gone through.  Little did I know of the things he went through that night.  My sister, Virginia, had a friend that had visited the Normandy American Cemetery at this time.  She took a picture of his cross and brought back booklets of the Cemetery.

Then, when the show Band of Brothers came out in 2001 it really started to make me think about Bud. I really wanted to find out about him.  I started thinking.  “How do I start? Who and how do I contact somebody?”  What compounded the problem is that I did not know my Uncle’s name.  All I ever knew him by was Bud.  I always assumed, wrongly, that he was named after his father Paul.  It was not until my mother took ill in 2006 that I found out my uncle’s name was John A. Daum.

I did a search for him on the computer and found out that he was with the 508th PIR of the 82nd Airborne.   I have found out a lot about him through the help of Dick O’Donnell and his website www.508pir.org.  With this information I have decided to tell everyone about my Uncle Bud.

John Daum was born on April 24, 1924 to Paul and Frances Daum in Marathon County, WI.  He was the 3rd child of 4.  He had 3 sisters Helen, Marcella and Rosella.  He received his education at St. Johns Parochial School.  He later worked for a farmer near Nasonville, WI.  From October 1942 to April 1943 he worked at the Weinbrenner Shoe Factory in Marshfield, WI.

In April, 1943 he entered the military service.  He served basic training at Camp Robinson, Arkansas.  From here he was to go to Fort Sheridan, Texas but instead he joined the Paratroopers.

In August he went to Fort Benning where he started his paratrooper training.  At this time he was with 541st, Co. H.  During the next 2 months he trained to become a paratrooper.  He stated how they trained, that they would run every place and did a lot of exercises all day.  He claims to have had fun as a paratrooper, but how one can claim to have fun doing 5 and 10 mile runs, does not sound like fun to me.  He learned how to pack his chute, jump from towers and finally from a plane.  In a letter that he wrote to my Mother, Helen, he told her to tell my father that “a lot of fellows were getting sick but he didn’t and he did not even have to clean his shorts.”  He also wrote to his Father after one of the runs.  He said that it was “really hot and a lot of soldiers were getting sick, but he didn’t and he kept going.  That Daum blood kept him going.”  It paid to have a sense of humor going through training.

On October 2, 1943 he received his wings.  From here he went to Camp Mackall and joined the 508th. He wrote his Mother and said “the 508th is a good company to be in and that they will be going overseas in three or four months.  I am proud to be in the 508th.”  Sometime at the end of October he came home for the last time.  In returning to camp he recalled of him and a fellow trooper from Illinois having trouble making the train because of a flat tire on the bus, but they both made it okay.

At the end of 1943 John and the rest of the 508th went to Northern Ireland and then to Nottingham England.  It was there that Sergeant Walter Barrett had told me of his contact with John.  “I knew John personally.  I was closely associated with him while we were stationed in Nottingham, England.  We trained at this location preparing for D-Day Invasion of France.  John was a good looking airborne soldier---with full head of blonde hair.  He could have easily impersonated a German Soldier.  One thing I remember about our brief association was that John and I, along with the guidance of an old regular Army Sergeant named John Petric, would practice “The Manuel of Arms” (precise movements in handling of a weapon during a drill or ceremony.)  We became pretty good at it.  I was proud to have entered combat with John.”

In letters home from England John said there was not much to do in England but to train and to go into town.  He compared Nottingham to Marshfield and mentioned the English girls as being nice.  In his last letter home on May 10th he mentioned the training and receiving a package from home.  He enjoyed the candy and was wondering if in the next package his mother could send some socks.  He also told everyone not to worry and that he hoped to be home in a year.  In almost all the letters he sent home he would sign them good luck and love, Bud.  In hindsight it was them that should have wished him good luck.

On June 6 the invasion of France went on.  In the book “The Americans at D-Day” by John McManus there was a story by Private Ed Boccafogli of my uncle the day before.  The story goes as follows; “Some could not escape the terrifying, depressing feeling that they were witnessing their last sunset.  Not far away from where Sergeant Brewer sat writing to his father, Private Ed Boccafogli, the B Company who was so disappointed at the previous day’s postponement, noticed one of his buddies, Private Johnny Daum, standing outside his tent, “like a statue looking into space.” The skinny towheaded Daum barely looked a day over sixteen.  Boccafogli had never known him to act so morose.  He was a few years older than Daum and thought of him as a little brother.  He walked over to him.  “Hey, Johnny what’s the matter?”

Daum hardly even replied.  He just stood there in a kind of stupor.  Boccafogli was really concerned now.  “What the hell’s the matter with you?”

Boccafogli tried to cheer him up:  “Ahh, come on.  Some of us will, some of us won’t, but you ain’t gonna be one.”

Daum could not be dissuaded.  He insisted on the imminence of his death.  Eerily enough, he was right.  He got killed on D-Day, Boccafogli never forgot him.  “These things stay with you the rest of your life.”

Today John is laid to rest at the Normandy American Cemetery and Memorial in Colleville-sur-Mer, France.

In a conversation that my niece, Gayle, had with my mother she explained why Bud was never returned to the States.  “My mother did not bring him home because a neighbor had brought her son home for burial and it was like losing him all over again and she did not want to go through that again. Plus Bud was resting where they had buried him.”

So that is the story of my Uncle Bud at this time.  What I have learned was that my uncle was not a very big man, probably about 5’4 and maybe 140 pounds.  My mother once told my niece, Gayle, that my uncle “was not very big, was quiet, and enjoyed to smile and laugh.” In the past my mother always told me that her Mother said that “Bud was the flower that never blossomed.”  I think today she would not find this to be true at all.  As Walter Barrett had emailed me “I am proud to have known him---John A. Daum--- a great American and a brave trooper.”

About the only thing left to say is;  “Good luck and love.”