James E McNiece was born in Maysville,Oklahoma. His parents, Elihugh and Rebecca emigrated from Arkansas.

He was the 7th of a family of 8 children. He grew up in rural Oklahoma, where fishing and hunting belonged to the obligations of every single young boy. He thus developed very early gifts as a gunner.

In the Thirties, the family left Maysville for Ponca City, the family farm having burnt. At 12 years old Jake had to work to help to bring money to the rest of the family. He was a driver - deliveryman.

Then, he joined the High school football team. He would leave High School graduated in 1939. He then worked as a fireman.

Jake really liked to have fun. And usually, it used to turn into fight!

As a fireman, Jake was free from doing his military service. Disappointed not to be able to offer his services, he joined in the parachutists in September 1942.

« I grew up in Maysville,Oklahoma, the motherland of the famous Indian pilot Wiley Post and I have seen him carrying out spectacular jumps in parachute at the end of the twenties. I was very into joining the parachutists.»

As he got there, he was assigned to the demolition group of the regimental company of HQ of 506st PIR. He was named Staff Sergeant for the section of the 1st battalion.

His first camp, at Camp Toccoa, Jake took place under a tent with 5 other guys. This tent did not even have a carpet on the ground, they were constantly filthy! They did not even try to get cleaned.

« We were absolutely undisciplined. I joined to fight the Germans not to be clean!»

This band was nicknamed the “5 Bastards” by the other guys.

In addition to the physical drive, they accepted the drive of the demolition and sabotage.

Already at that time, Jake was a true “daredevil” fighting with the sergeant of the mess, refusing the salute to the flags and fought with the MP' S.

« The ceremony of the morning call and the retirement were the most stupid thing I’ve never seen in my life! »

But afterwards, he was led towards Fort Benning to get the patent of parachutist.

On July 13, 1943, he was on the way to Fort Bragg, North Carolina. Over there, Jake was noticed for having stolen a train and exploded a tree to frighten a sentinel.

On September 5, 1943, he left USA for England, shipping on the USS Samaria.

« We did not greet the officers and we did not speak to them by saying the traditional “Sir”. We used to call them by their nicknames.»

In England, Jake and his section were distinguished to have hunt and have fished, which was completely prohibited! Moreover, they were more and more dirty!

« The mattresses were disgusting, filled with dried bran. The mattress was simply laid over bedsteads. If somebody bumped in there, a blur of  dust would just rose. My guys were dirty as hell! We were sleeping in our uniforms 7 days a week. The ground was brickless which was impossible to scrub ! When there was an inspection, we told the officers off. We suffered restrictions, but we did not care because as soon as we could, we would escape the camp without perm'. We were really a band of bastards! »

« I shaved my head to avoid being infested by lice.»

To complete the haircut he then painted his face. To end up, the whole section got it too!

During the flight towards Normandy, he attended the DCA shootings.

« It was splendid, there were some blue ones, and some red ones and some green ones !»

On the aircraft, he joked with the guys, spoke about the plan. They had to blow up the bridges downstream from the canal and then, to get the main bridge.

The jump happened without trouble. On the other hand, on the ground, he was completely lonely.

« I was there standing alone for 2 hours and had not still met any other parachutists, even not heard the sound of a weapon. I started to believe that the invasion was cancelled. »

He ended up meeting and rounded ten para up. They moved towards their mission. They blew up the bridges as they were supposed to do.

On the other hand, holding the bridge was much more difficult! They had to resist during 3 days and 3 nights the attacks of the Germans and to end, it was a P-51 Mustang which destroyed the bridge!

« I was submerged by anger. We had kept this bridge despite all opposition ! And its our aircraft which bombed it ! »

Jake also took part in the attack on Carentan.

« We had to clean up house by house. That took us until midday! »

« We got 2 month wages plus everything we stole in France. They also granted us a 7 day permission.»

Jake McNiece also jumped over Holland, on September 17, 1944. Over there, the demolition group fought like airborne troops. It actually demined 3 small bridges overhanging Eindhoven canal and had to look after it.

On September 19, it was bombarded by the Luftwaffe. Then, his section was back to the regimental HQ in Veghel. On the way, they underwent an ambush.

On September 25, they took part in the “cleaning” of Veghel road. On October 2nd, the 101st was sent to the “island” area.

Over there, Jake took part in the rescue of 60 British Red Devils parachutists on the 22nd and 23rd of October 1944. Then, the division was sent to Mourmelon in France to rest.

« In Holland, we had fought 78 days non stop. On our way back, they granted us a 72 hours permission! This permission was moreover, only valid in Mourmelon ! »

Not satisfied, he decided to take a non authorized 5 day permission in Paris!

« When I got back from my little trip, they immediately sent me to the cell!»

Those officers were completely fed up with his behaviour, he had to sign up with the Pathfinders. They really wanted to get rid of him!

« They were tired of the stupid things I could do ! »

Thinking that the end of the war was close, he agreed. Their base was located in England and over there, food was far much better!

On the spot, he managed the organization of the sticks and the program of the drive. On December 22nd, he found out the 101st was isolated in Bastogne! He was in charge of the jump over the city with the mission to mark out a zone for a restocking. The jump took place under extreme conditions! Not only, because of the weather but also because the shootings of the Flak.

Once on the ground, they run quickly to the cemetery and placed the beacons. Their beacons actually guided 6000 planes filled with materials, ammunition, fuels. In Bastogne, he remained with the Pathfinders until the evacuation towards Chalgrove in England. On February 13th, 1945, McNiece carried out his 4th jump of combat.

In Prüm, the 90th Division of Infantry was cut off with her backs. McNiece and his stick were sent over there. He only lost one man out of 10 compared to the practice where usually 8 parachuted men out of 10 were lost. In April 1945, Jake McNiece was back to the Regimental HQ of 506th PIR close to Lansburg. He could remember when the HQ of Hermann Göring was caught and also about the Eagle’s Nest. Then it was Zell-Am-See and the occupation of Austria. From Zell, he can remember the lake where he especially went fishing!

« Each day, I was escaping to go fishing. I still had some explosive yet. The explosion provoked the death of the fishes! »

On July 1945, he was named First Sergeant. On September 12th, they left Austria for Auxerre in France. And to end, on December 20th, they were back to USA.

On his way back, Jake travelled through all over the United States with his father. (His mother died during a trip in Europe)

« And of course, my employers laid me off for alcohol abuse ! »

After that, he left for California. He worked in the building industry. After 3 years, he turned over to Ponca City, where he met Rosita Vitale there, a young widow who already had a girl. He married her on July 6th  1949. He then completely stopped drinking!

« Except with the other guy of the Regimental Company of HQ during the meetings. »

He worked at Ponca City mill then in a mine of City Service in Lake Charles, Louisiana. At the beginning of the Fifties, he worked at Tulare post office, California and remained there for 27 years until his retirement.

He had been married with Rosita for 3 years, when she died of a cancer. At the end of 1952, he met Martha Louise Beam-Wonders. She was also a widow. They married on September 4, 1953.

« She had a 14 year old son. I raised him as well as Rosita’s daughter. Martha and I had 2 children, Rebecca was born in 1956 and Hugh was born in 1959. After my marriage with Rosita, I became a good Christian. By looking at my life I carried out before, I had a particular relation with God and I liked it for what it was. When Lord forgives something, He does not remember it anymore ! »

Jake McNiece was decorated with 4 Bronze Star especially for his action in Normandy, Holland and in Bastogne and 2 Arrowheads Bronze. 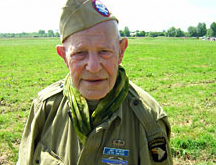