All my thanks to Darrell Glass for answering all my questions as for his kindness and his availability. Thanks also to Hélène for the translations and always being present. 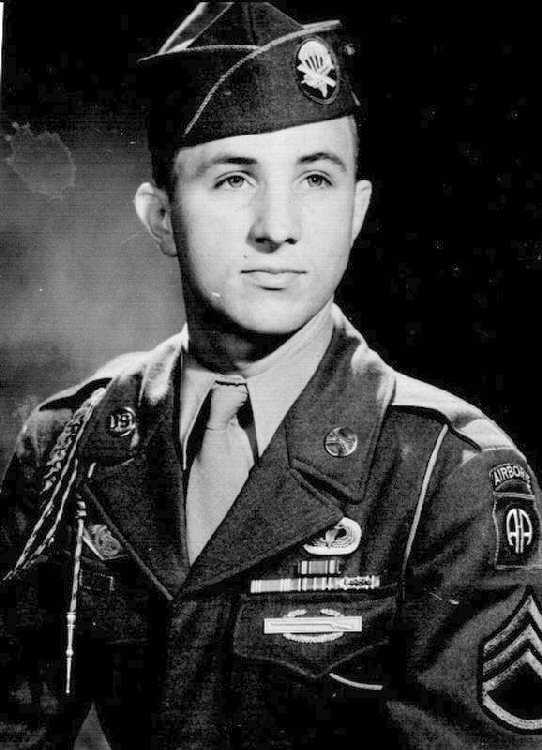 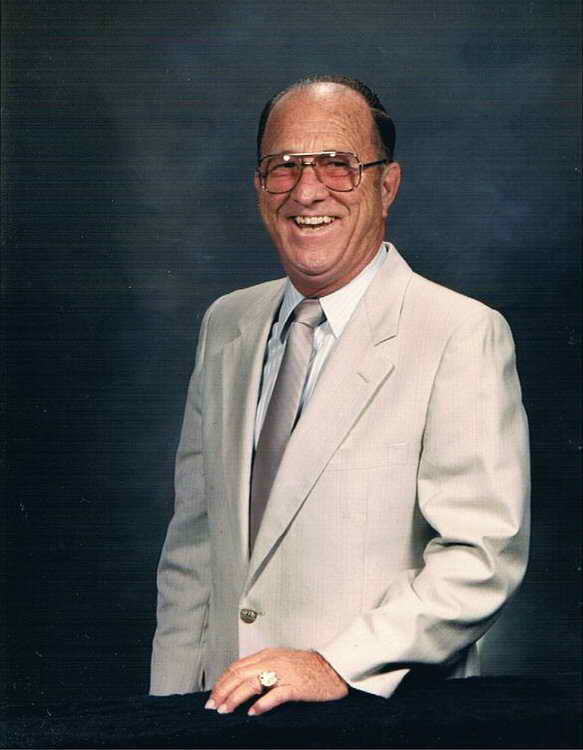 George Darrell Glass was born on November 26th, 1924 in Arkansas.

Her father used to work in a farm.

Before the war he attended school, he had a very happy childhood.

He joined the army on February 19th, 1943. He can not remember very well his very first unit. But after some months, he asked to be transferred with the paratroopers.

“At the beginning I was in the right place I volunteered for the Paratroopers, it was the only way to get out of here. The best thing that ever happened to me during my duty!!”

Darrell Glass (but he prefers to be called Darrell instead of George)was sent in England with another contingent of soldiers.

“I Loved England.I Had a girl friend at that time I almost wed!!”

Darrell Glass thus was trained to become a paratrooper in England.

“We ran 7 miles twice a day and did many many push ups at te whim of the instructors. We had no towers (NOTE: like Fort Benning)and it was a makeshift jump school. We only had a makeshift mock door to learn to jump from in correct position, and the only time we left the ground was to go up in and airplane and make our first jump. We did have 5'high platforms to learn proper landing and tumbling. We made 4 day time jumps and one night jump. The training was very hard as they had to get us ready by the time for the invasion!!”

“I had never been in an airplane before jumping at the para school. I thought the C-47 was great!”

He would join Company C of the 508th PIR of the 82nd Airborne. But Darrell and the other new recruits were too late graduated from school to be a part of the invasion.

“I did not jump over Normandy; I left the para school and was sent to the 508th arriving 2 or 3 days after the regiment was already waiting on the air field.”

Then Darrell Glass joined the "Executive" and was placed on alert to be ready to join his unit either by parachute or by glider or even by boat, in Normandy if the need was there.

With 2 or 4 other soldiers, Darrell ws assigned to the HQ of the regiment.

“We spent time every afternoon has to type letters to the parents or the other members of the family to inform them that their son had been killed during fight or hurt or missing."

“There were many tears while we typed our letters. We thought all of those men of our new unit whom we would never know."

Darrell Glass jumped for the first time over Holland during the operation Market-Garden on September 17th, 1944.

“It was a very good flight with British fighters in escort and they were doing superb diving straight into anti aircraft that were firing at us and even one dog fight with a German fighter.”

The jump was good but the landing was hard!

“It was a wonderful jump except when I looked below me, I saw I was leading myself directly to the top of a big house. I seized at once my carrier straps to slide on the left as much as possible to avoid the wide roof which would have broken me a leg or even worse. I came down too quickly. I broke suspends them just before getting to the ground. I touched the ground with such an angle that I probably rolled along 3 or 4 meters quite tangled in my parachute that I have of to cut."

Darrell Glass eventually landed in the northern extremity of the DZ near Nijmegen. The German resistance was weak on the DZ, but the next day, the Germans recovered.

At 10 am, Darrell's battalion received the order to clean the DZ of the German presence.

“We were told to go back to the Drop Zone and clear it of the Germans who had re occupied the zone and clear it so the Gliders could land in. That was during the mission my First Sergeant Funk got the Distinguished Service Cross.”

At the time of jumping over Holland, Darrell Glass was ranked a Corporal.

Darrell Glass would receive a permission; he would go to visit Paris.

“We mostly visited Paris (OOO La La!!!) and a few local villages!!!Also Rheims which is a Beautiful city as was Paris!”

“But we also did have activities to keep in shape!”

On December 16th, 1944, the Germans launched their big offensive in the Ardennes completely surprising the Allies.

“We were quite surprised because we had not even got all the new equipment and gear to replace the one what we had worn out in Holland.”

“When we went up to the Ardennes we were not even equipped for winter that was about to set in to be very rough!”

On December 18th, the 508th was sent to take position near Chevron. On the 19th , it reached its positions and buried itself.

“When we arrived that evening and after we dug in we went to sleep for the night and woke up with a little bit of snow. Of course it got worse as time went by!”

Until December 23rd, the regiment had no contact with the enemy. A position of defense was established along Thier du Mont's crest on the West by Salm River. The 82nd Airborne was placed to make a corridor of resupplying for the 106th Infantry Division and the 7th Armored Division which were pushed by the German attack. The positions of the 82nd looked like a "finger" with in the rear, the 508th PIR.

“We saw a lot of unit which withdrew, they were shot down. They were happy to see us so they could feel a little bit relieved! And during all this time our lines were harassed. "

“As you know it, our regiment was occupied with withdrawing. One of my buddies of C Company went into an abandoned house and being our number one scrounger he came out with a whole bunch of bottles of Champagne which he handed every on at least one or two bottles to carry which was quite a burden considering we had weapon and other gear we were carrying but we didn’t mind,( on As hole whined about having to carry the extra load and was told by the Scrounger ( Arthur Acre) that is he dropped even one or broke Andy at all he would be a dead man)!! So we carried the bottles  The next day a Deer came running through the area and one of my buddies(Tommy Tomlin) shot it so a few days later (maybe 3 or 4 days ) after the meat had cured somewhat and the battalion cooker could make arrangement for necessary equipment to cook and serve it.. We had Venison and drank the Champagne?? Thing got much worse from that pointing as you know from reading the history.”

On February 10th, at 2:00 am in the morning, the 1st battalion started the fight. C Company considered very heavy losses when it penetrateds into a mined ground and under the shooting of the machine gun and mortar. The company was removed and connected to A Company.

On February 18th, the 78th Infantry Division crossed  the Roer River, the "Red Devils" were again sent near Aix-la-Chapelle. From there, they embarked on cars for their camp located in Sissonne.

“It was the greatest day you can imagine!! At Last it was over and we could all go home. Of course we drunk loads of the wine in Chartres much less than the rest of France!!!”

After a brief stay in Sissonne, the 508th was sent to Frankfort-Am-Main to occupy the city and to be in use as guard of honor to General Eisenhower commanding the SHAEF. The men were going to live in comfortable flats with the special services. The best affectation of all the theatre of operation.

“I never really met him I know all about him and heard many good remarks about how he treated everyone. I remember our Football team won the ETO championship on the very last play of the game and General Ike was in the audience.”

During this period, Darrel Glass became a Sergeant.

“I was a Sergeant for a very short time when I apparently impressed one of our Lieutenants, Lt Kampf and he told me that what I had done was going to make a "rocker"of me Staff Sergeant) which he put in for me and I got it within a few weeks!!”

During October, Darrel Glass left Frankfurt for Berlin, to join the 504th PIR which had to return on the following days to the United States and to parade on the 5th avenue in New York in March.

“When I and several others were asked to remain in there in March a whole bunch of us turned it down as we wanted to go home. I then went from place to place and finally got on a ship out from Le Havre and arrived in New York on New Year’s Eve.”

Back in the United States, Darrel Glass and his companions were sent to a camp. The Colonel told them that the movements were limited to the camp. Any speechless exit because he could be sent away at any time. But it was the day before the New Year Day’s.

“As one man’s voice our reply was OH YEAH??? Needless to say we all got dressed in our class A Uniform and marched out the Gates to go in to New York City to celebrate New Year’s Eve!! The guard merely waved us through and said have Fun Guys!! Which of course we did.

We had a ball and could not buy a thing. The folks of New York treated us like kings !!”

On next day, Darrel went to the airport to embark on a C-47 and went back home. He landed at Fort McArthur in California.

Darrel Glass studied to become an architect. He met a girl at university in October, 1947 and they got married.

Darrell worked in different jobs before working in the finance business and working for Transamerica during 35 years. He retired in 1987.

Since the end of the war Darrel Glass iwa very active within the association of the veterans of the 508th.

“I served on 2 different opportunities as the President and brought a number of innovations to the further improvement of the association. From the war, Darrel Glass came back with a sword engraved in the date of 1766, a rifle of caliber 45 and a small hoarse feminine rifle for their handbag. Darrel still got his uniform."

“With his wife, Darrel Glass returned 6 or 8 times in Europe to visit Belgium, Holland and Germany. He also participated 4 or 5 times in the remembrances of D-Day in Normandy.inowadays, Darrel Glass lives a quiet life to Fullerton in California which is about 25 miles in the Southeast of Los Angeles. His favorite activities are hunting and fishing.”