The company has been re-informed the 24 of June 1921 as an Engineer Battalion. His training took place at in .

The 31 of March 1942, the Unit has been designated as an Airborne Engineer Battalion (AEB) and activated at Clairborne Camp in Louisiana. Later the battalion has been moved to in with the rest of the 101st on the 29 of September 1942. The battalion took part to all training and maneuver of the division.

On the 5th of September 1943 after his departure from the 326th landed to Liverpool from a ship named HMS . After this long crossing the company had to take the train to near in . Under orders of lieutenant colonel John Pappas, the battalion began target practice, gilder flight, physical and technical training.

The 326th took part to the airborne invasion in . Lieutenant Colonel John Pappas died during the fight on the 13 of June 1944. He was replaced by Major Hugh A. Mozley who assumed the command during MARKET GARDEN operation and siege.

The 326th was finally disbanded the 30 of November . 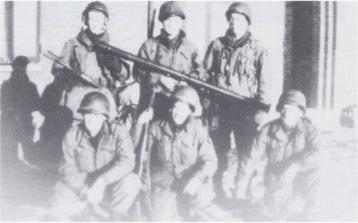 On the bottom: unknow, Packy and John Tocco.

2 Presidential Distinguished Unit Citations for operations in Normandie and

War Cross with palms for the operation

2 War Cross and Lanyard for the Bastogne operations

Lanyard Oranje from the Netherlands for the operation Market Garden